Book The China Study- A Review

In this article you find a review of the book ‘The China Study’. The research that is presented in this book indicates that a vegan ‘whole food, plant based diet’ is the best choice for optimal health and for the prevention of diseases. 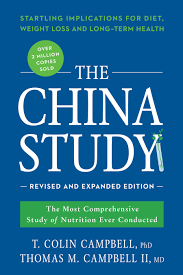 The most comprehensive study of nutrition ever conducted

One of the triggers of conducting this research was that the prime minister of China, Chou Enlai,  was dying from cancer. The Chinese government wanted to know what actually causes cancer. The American and Chinese research team therefore had almost unlimited budget and human resources available to conduct this research. The research was done under supervision of the American Professor Colin Campbell.

More than 650.000 researchers were involved in this study.

What others say about Professor Campbell

The New York Times considers The China Study as ‘the Grand Prix of Epidemiology’ and Dean Ornish, Clinical Professor of Medicine, University of California says about it:  ‘Everyone in the field of nutrition science stands on the shoulders of Dr. Colin Campbell who is one of the giants in the field, the ‘Einstein of nutrition’. This is the most important study on nutrition ever conducted, reading the book may save your life’

Switching cancer ‘off and on’

People dread cancer more than any other disease. In the Western world about 1 of 3 people develop cancer before their 65th birthday, which is a staggering and unbelievable number. What is the role of diet in this concerning number? The role of diet is enormous and profound, The China Study presents.

Here’s what Marilyn Gentry, President of the American Institute for Cancer Research (AICR) says about The Book The China Study:

‘Colin Campbell’s book The China Study is a moving and insightful history of the struggle-still ongoing- to understand and explain the vital connection between our health and what we eat.  Today, AICR advocates a predominantly plant-based diet for lower cancer risk because of the great work Prof. Campbell and a few other visionaries began twenty-five years ago.’

The China Study also reveals the preventive and, in many cases, healing effect that  a vegan, whole food plant based diet has on other major western diseases like diabetes 1 & 2, heart disease, obesitas, autoimmune diseases and many more.

So yes, indeed, reading the book The China Study may save your life as Professor Dean Ornish stated above.

Some findings in The Book The China Study when following  a vegan (whole food plant based) diet:

Prof. Campbell himself was born and raised on a dairy farm. From his earliest childhood until the moment that he started with The China Study he had been taught that eating dairy and meat is healthy for you. In the book The China Study he shares his inner struggle that was caused by the discrepancy in his beliefs about consuming dairy and meat in relation to health and the completely different reality of what the data,  as mentioned above, of the research showed.

It was a shock to him but in the end his scientific mind (accepting the facts) won the battle over his emotional belief system. He himself changed his diet completely to a vegan, whole food plant based, diet.

When you are planning to read this fascinating book keep in mind that the book is about a study, it is not a novel! There are lots of graphs, figures and tables to show the findings in the study. At the same time, for a scientific book, it is easy to read and to understand the content even when you are totally new in the field of nutrition. Reading this book, I believe, will add tons of insights and knowledge to your current understanding of healthy eating.